Back in the 80s and 90s, the market for PC games and console games attracted two very different audiences.   In general, the PC market became known for more cerebral games - simulators, strategy games, in-depth RPGs and point-and-click adventures - while consoles were more known for arcade and twitch action titles.  There were exceptions of course, but that was the general rule.  Today, however, the market is relatively homogenized; for the most part, the the same games tend to get released on both PC and consoles, and we've started to see adventure games, real-time strategy titles and flight sims make the jump to the living room, as well as endless controller-versus-mouse-and-keyboard debates among fans of first person shooters.  One field where the PC has always dominated, though, has been the strategy genre, and nowhere is that more apparent than with arguably the greatest turn-based strategy title ever released, X-COM: UFO Defense. 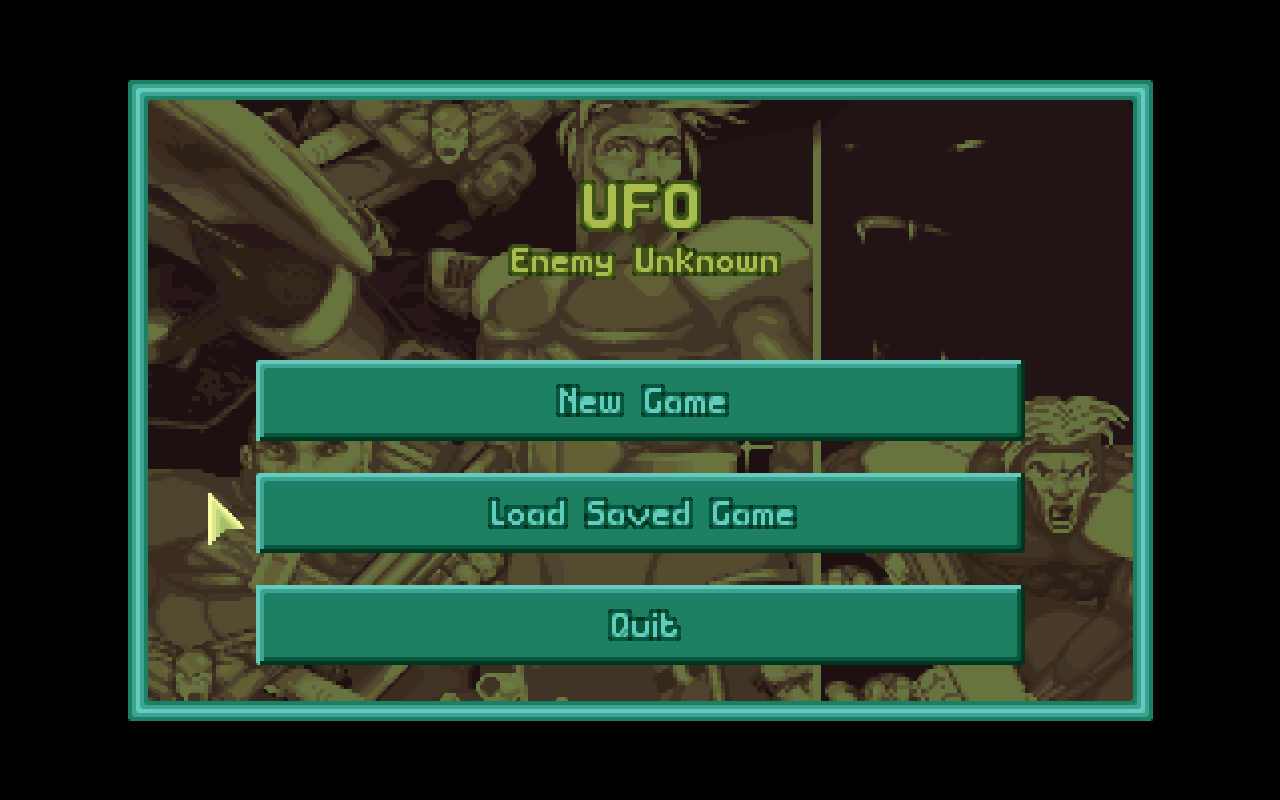 Brought to us by Mythos Games and Microprose (a company which brought us many highly acclaimed simulation and strategy titles in the 90s), X-COM was nothing short of groundbreaking for its era.  Not content with just having turn-based battles against invading aliens, this was a game that put you in full control of a private army down to the last detail.  You managed the budget, you personally outfitted your squad and ships, ordered attacks on spotted ships, research on alien technology and manufacture of new weapons based on it... hell, you even ordered new facilities to be built, be they extra stores, more living quarters, extra laboratories or anti-air defenses once the aliens started getting really belligerent. 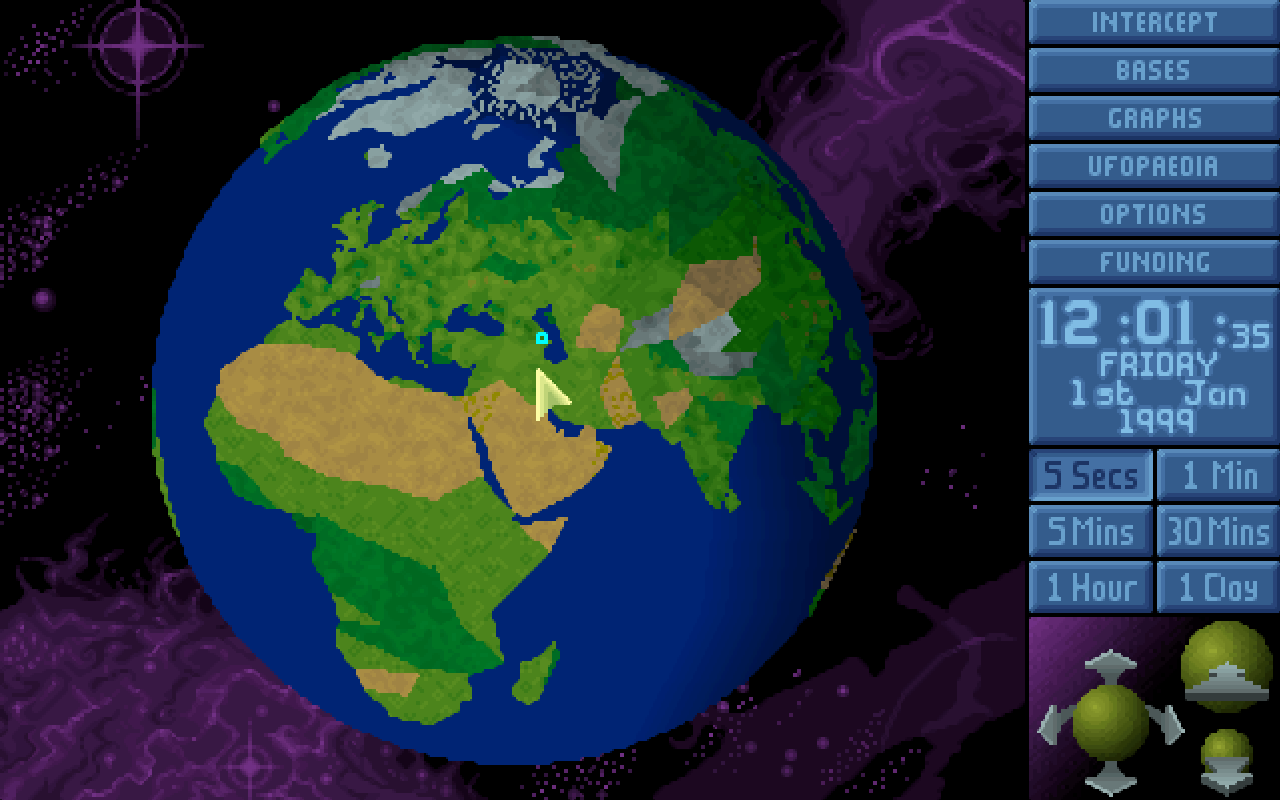 As the game begins, you're given the option to position your first base.  Most people recommend putting it somewhere in central Europe, and that's probably the best way to go since UFOs tend to gather there.  That also allows you to cover the largest number of X-COM-funding countries, which will secure you a nice nest egg provided you do a good job defending them.

It's kind of slow-going at first, though, so let's check out the base itself. 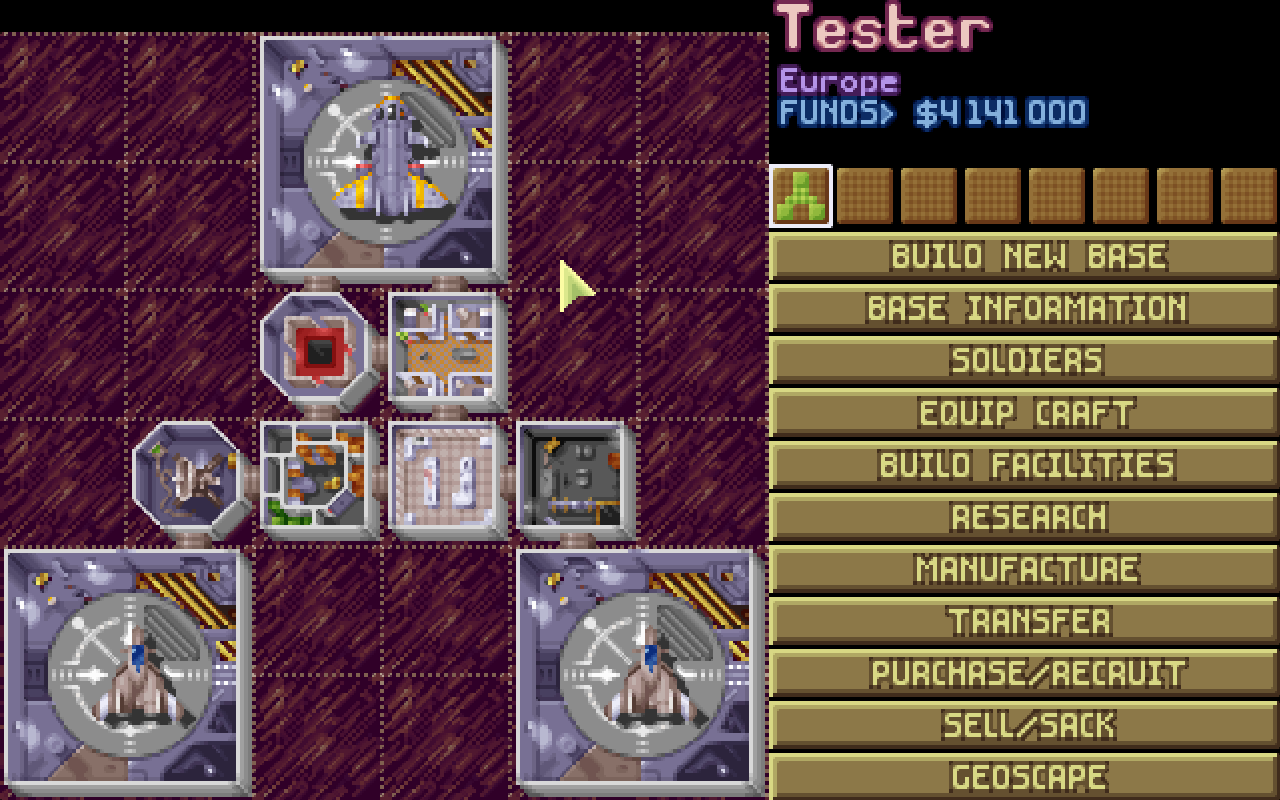 From here, you can get an overview of your base's facilities, as well as tallies for your equipment, soldiers, scientists and engineers.  Soldiers do your fighting when it comes time for that, scientists research captured tech, and engineers build anything you've learned to manufacture through scientific analysis.  Pretty good stuff.  But since we don't have any captured alien technology, they don't have much to do just yet.  Still, having them get started on researching med kits at this stage probably wouldn't be a bad idea.  Bolstering their numbers and usable lab space couldn't hurt either.  Oh, and having an alien containment facility would also be nice for any live aliens you manage to capture. 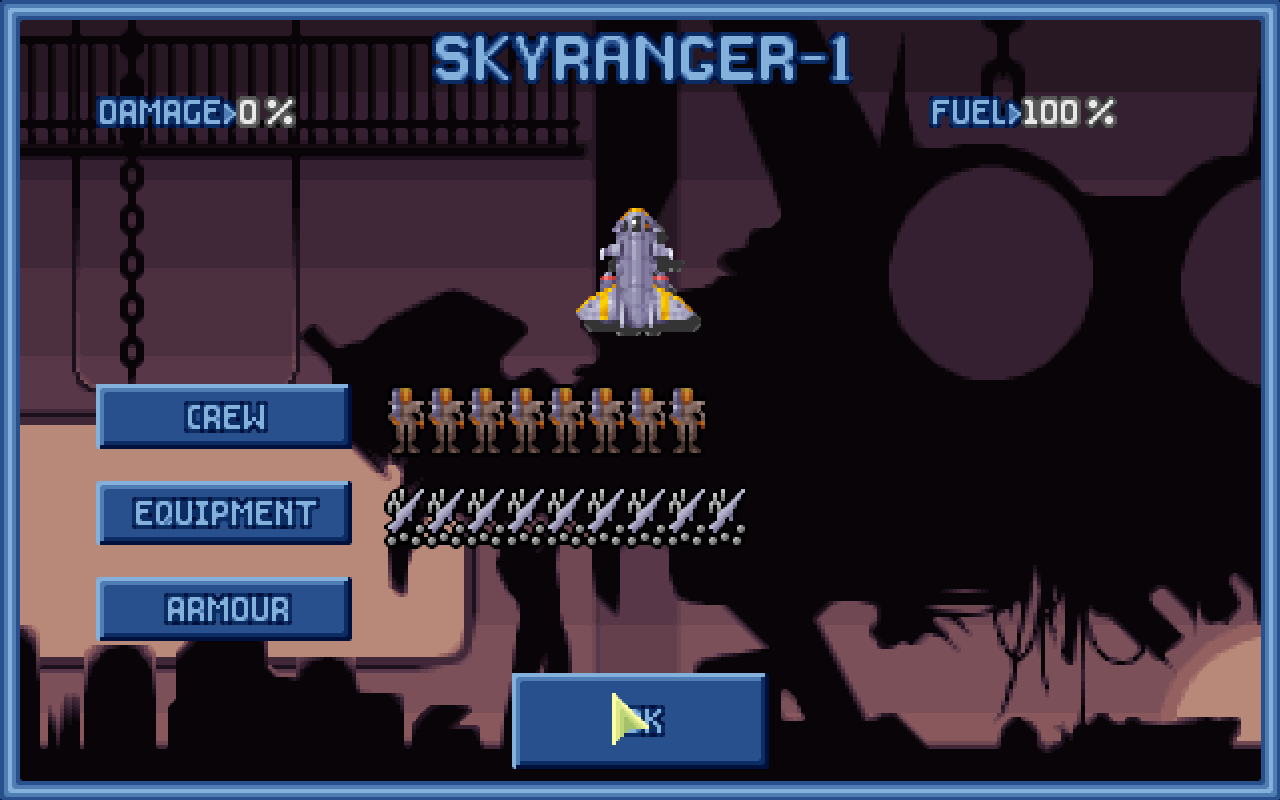 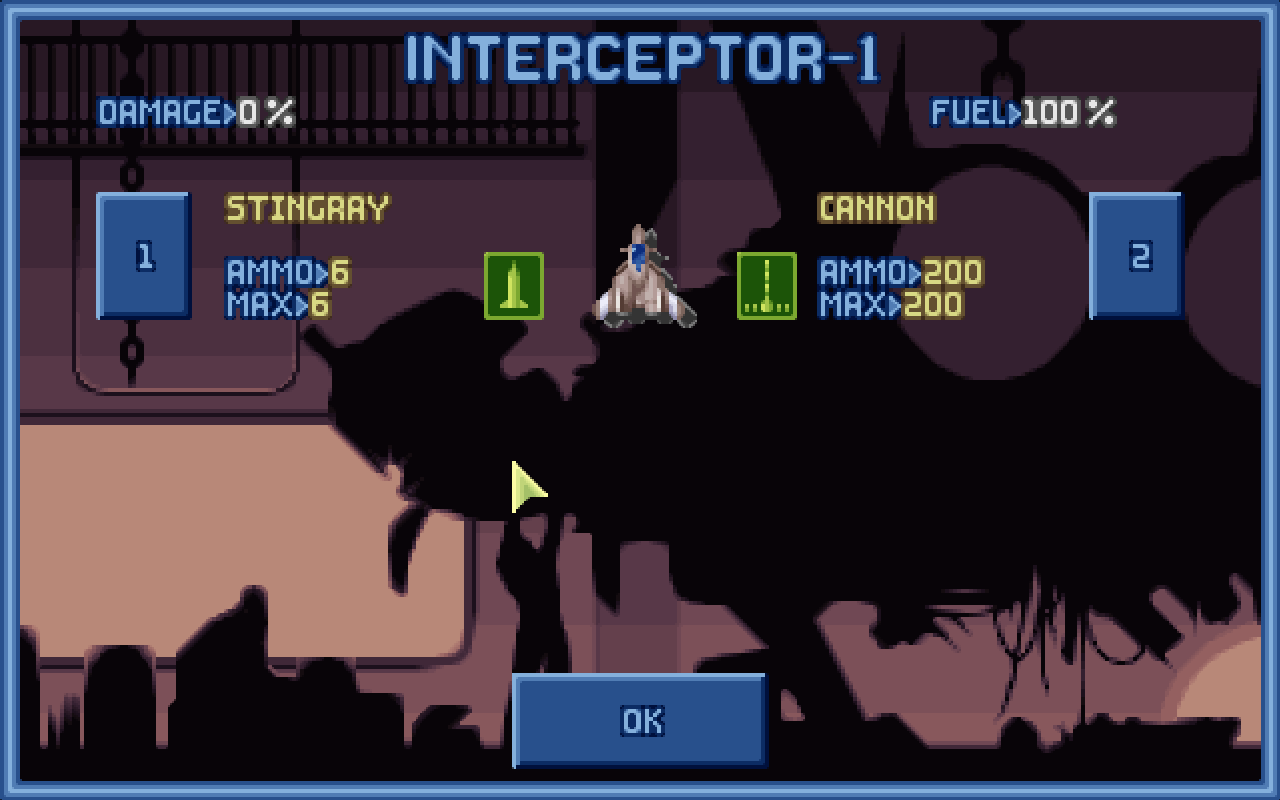 As for your air support, you start with two basic "Interceptor" craft and one Skyranger.  The Interceptors serve as your anti-UFO air support whilst the Skyranger ferries your soldiers and equipment to and from missions.  Notably, you don't outfit your squad in quite the way you'd expect, save for equipping them with armor - instead, you load all the weapons and items you think you'll need into the Skyranger and then distribute them accordingly at the start of each mission. 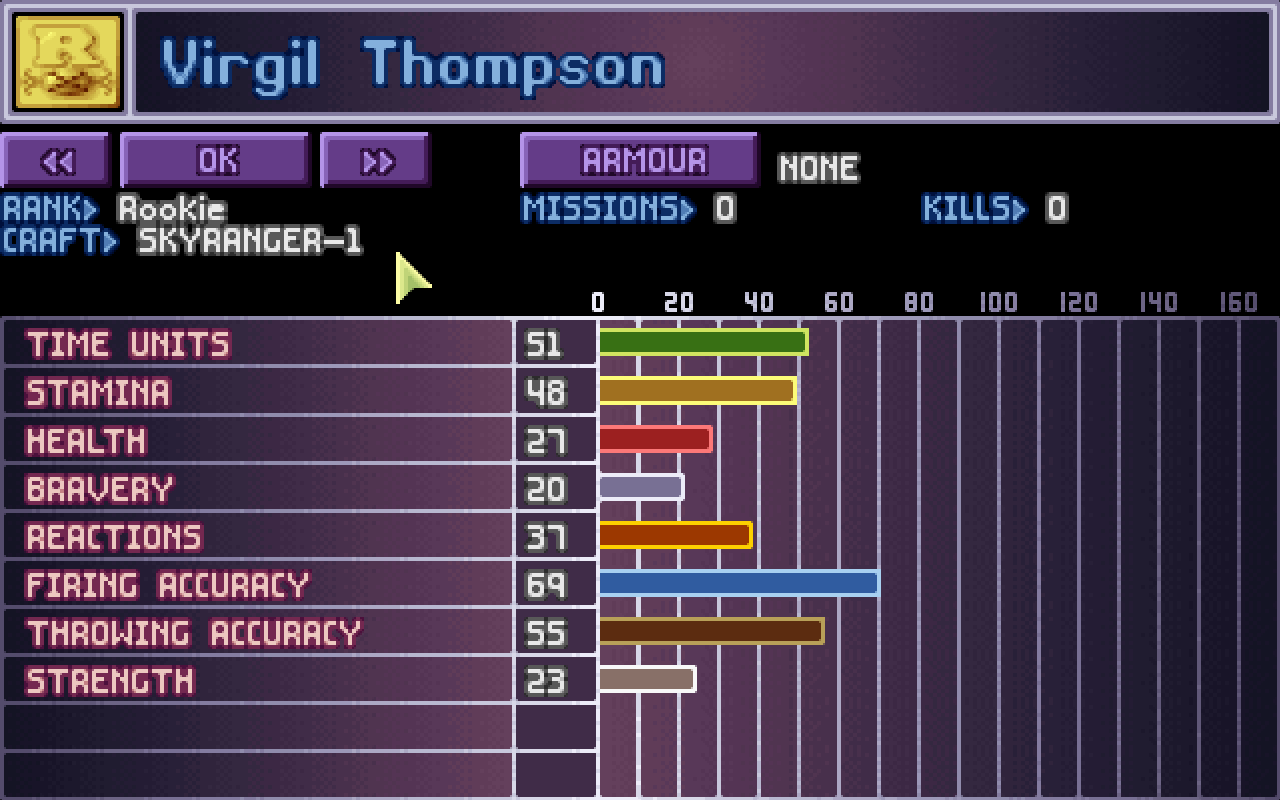 You start out with eight soldiers, all with the lowest rank of "Squaddie" and the barest minimum of equipment for them to use (which boils down to a few off-brand assault rifles and not much else).  In a nod to realism, soldiers are not all built equal.  Some have better health, some are more accurate right out of the gate, others have quicker reaction times or higher bravery, and some are just plain mediocre at everything.  However, they can be whipped into shape over the course of a mission - as they land shots and make reactionary shots to enemies, their accuracy and reflexes will increase, and as their rank rises (by surviving missions and getting kills), they'll become a bit more confident and able to take another hit or two.  Skyrangers can hold up to fourteen units, by the way, so you may want to hire a few more soldiers just to fill in the ranks.

Now that we're fairly well prepared, it's time to play the waiting game.  Quite tedious at five-second increments, but thankfully we can turn up the time that passes each tick in increasing increments up to one day (which I don't recommend using as you can easily skip over events by mistake - stick to 30 minutes or an hour).  Within a few days or so, you should get your first UFO sighting. 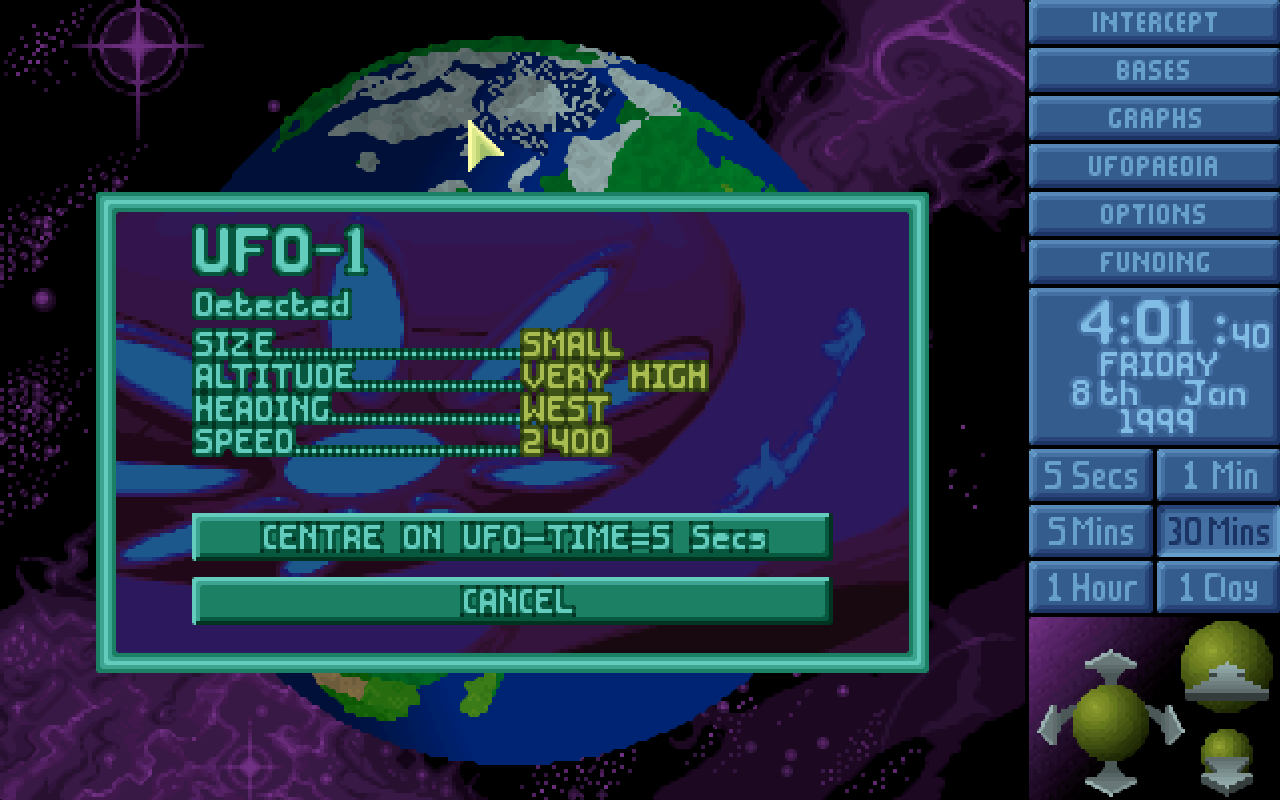 There's one.  Let's bring it down! 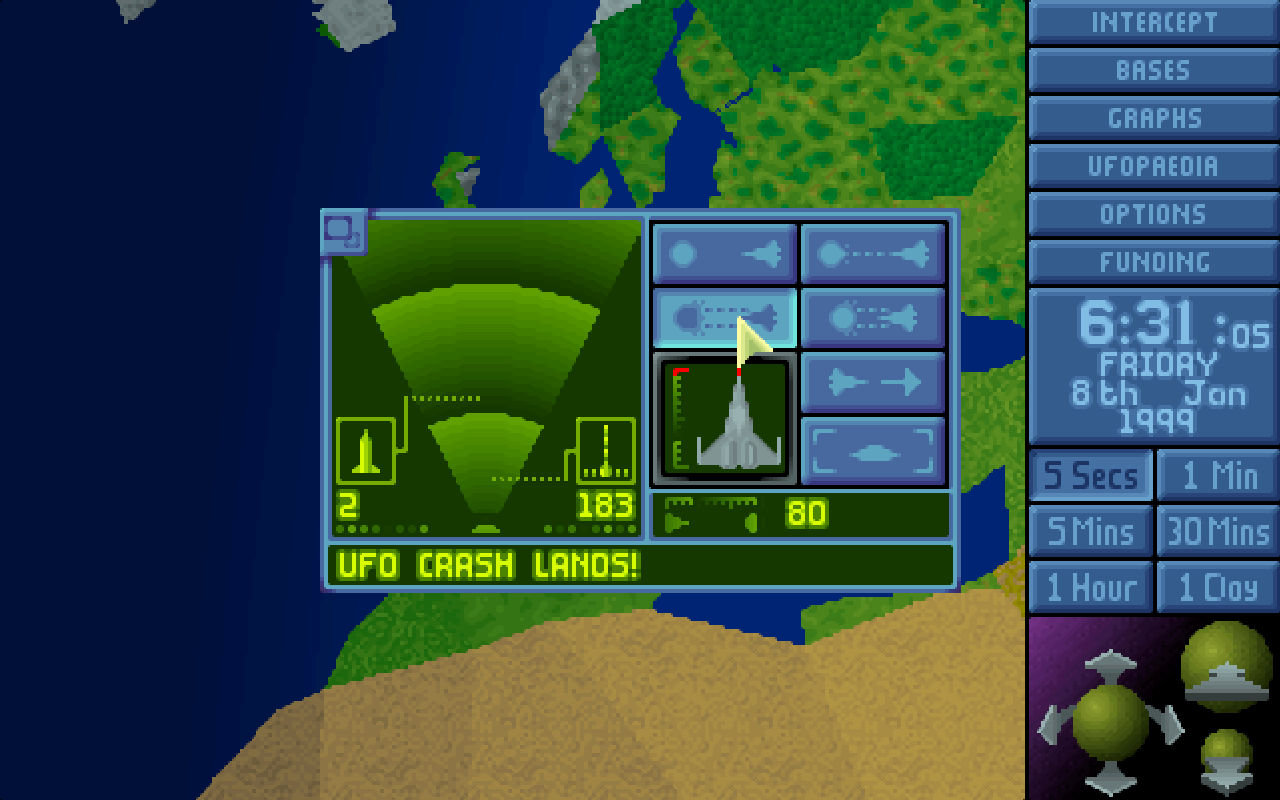 Interceptor-1 lands a hit with a missile and sends it crashing to the ground.  That's our Skyranger's cue to carry our soldiers into battle. 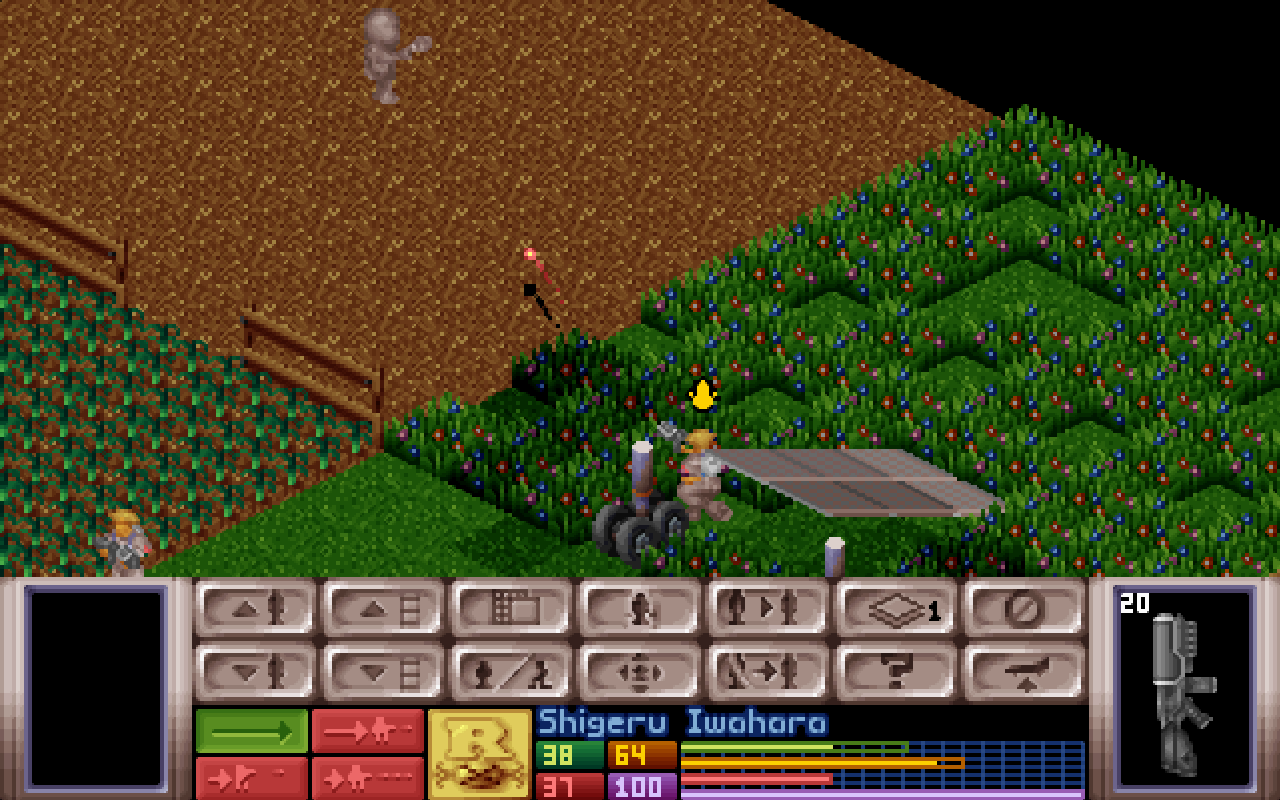 This mission, like most, boils down to combing the map and eliminating every last alien while trying to recover as much of their technology as possible.  This can get very annoying at times when there's one alien lingering around in a corner in a barn or something and you end up spending 20 minutes looking for him, but that's just how it goes sometimes. 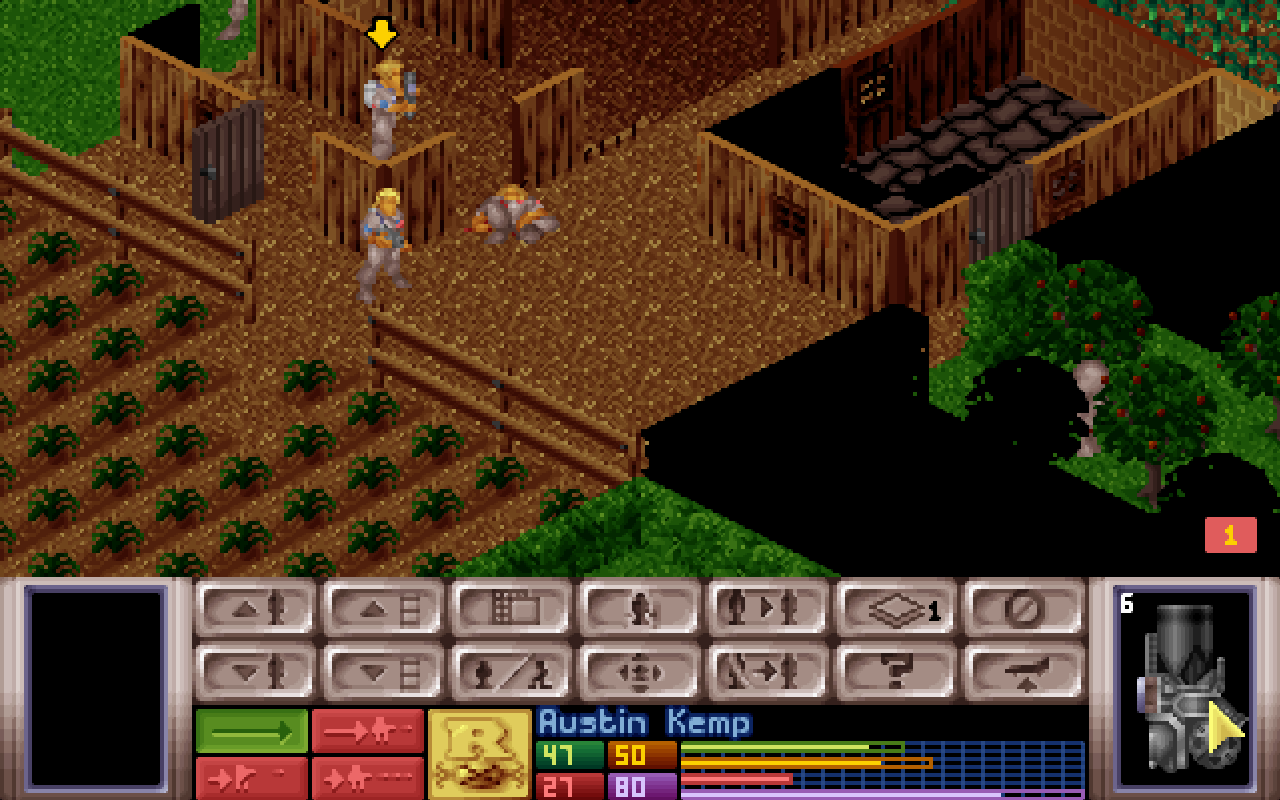 A sight you'll probably see more than a few times - your guy rounds a corner and gets a plasma bolt to the face before he can even react.  This becomes less of a common occurrence once you get some decent armor, but for now you should probably have your men with the highest Reaction stats do the scouting.
Five dead squaddies, but at least we have a few new toys for our scientists to play with.

Also, your starting rifles suck.  A lot.  It took five men to bring this one Sectoid down because their shots kept missing by at least a foot... 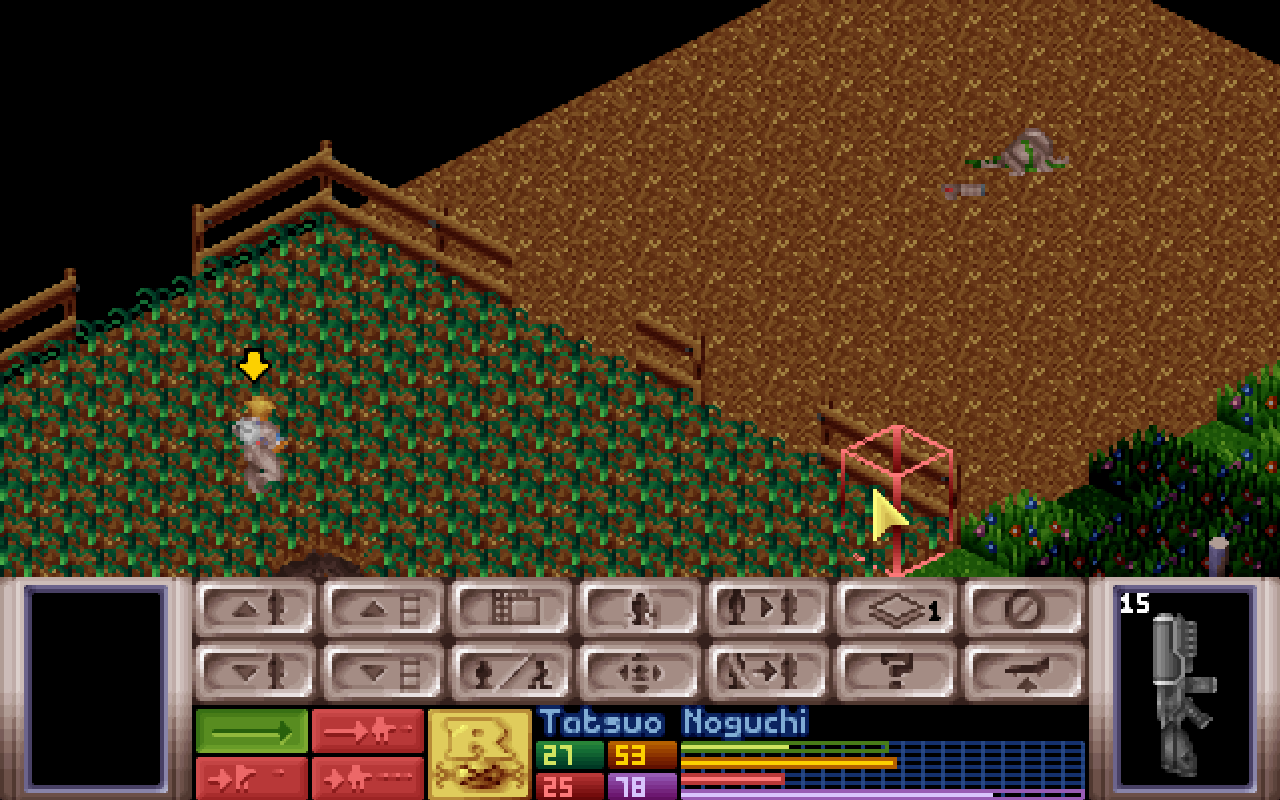 At least this guy's having better luck. 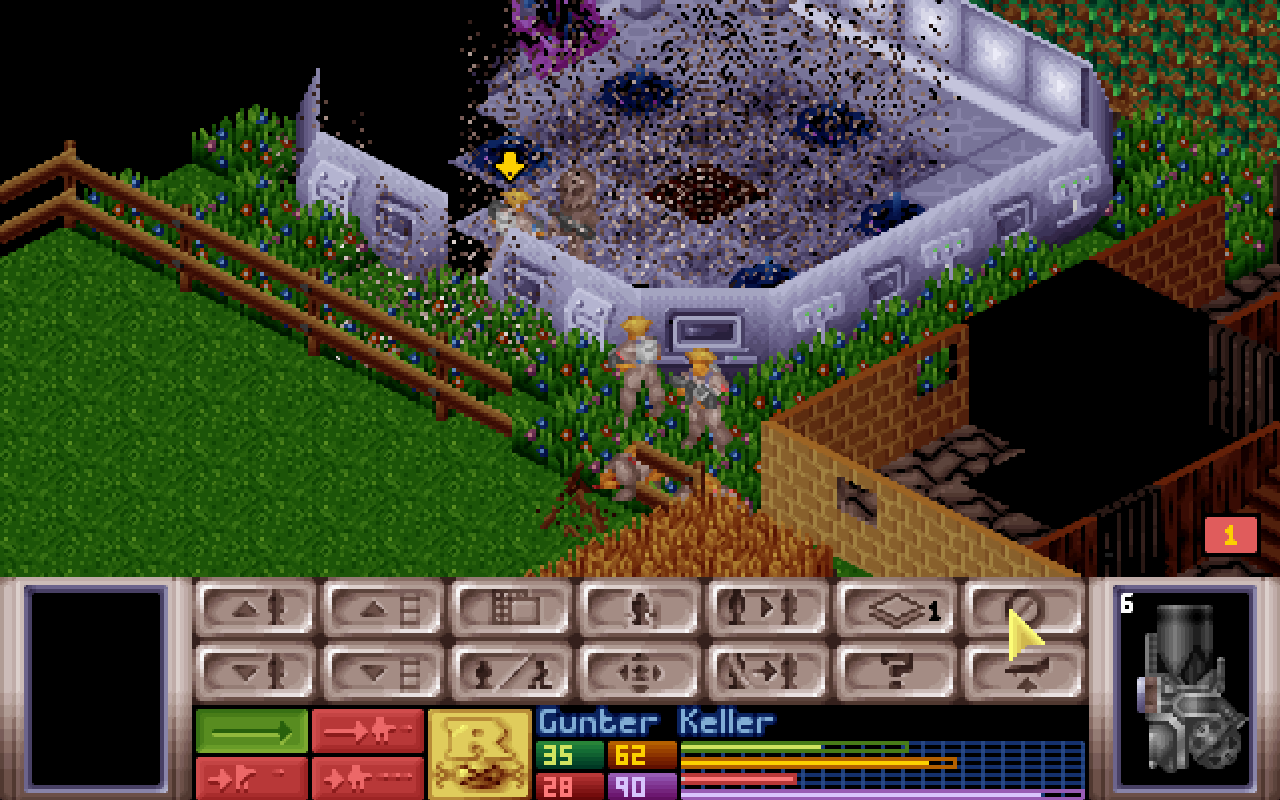 There's usually a straggler or two in the wreckage of the UFO.  Fortunately this one's right inside the door and my guy's quick enough to get a shot off before he does, so he goes down with little fuss. 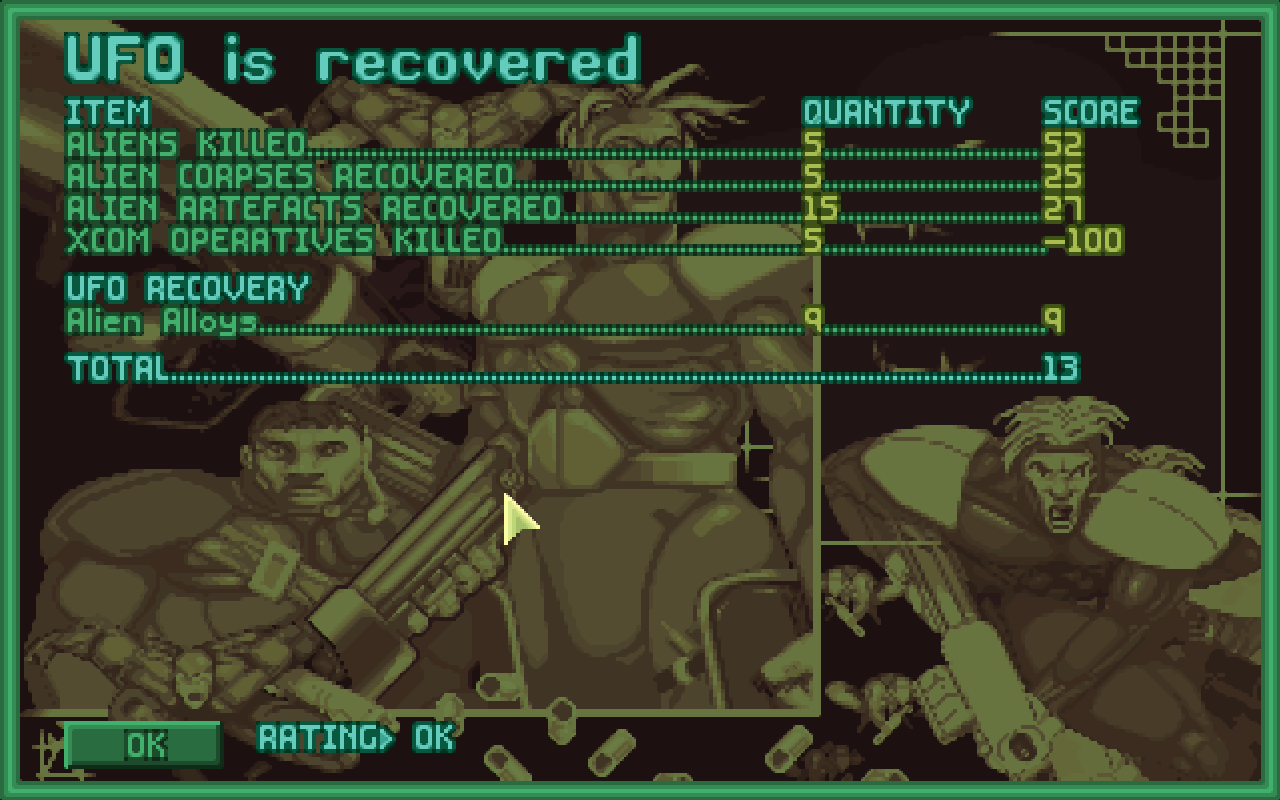 Five dead men, but at least we won.  Plus we brought back some goodies for the lab boys in the form of alien alloys and some of their weapons, so that's always a plus. 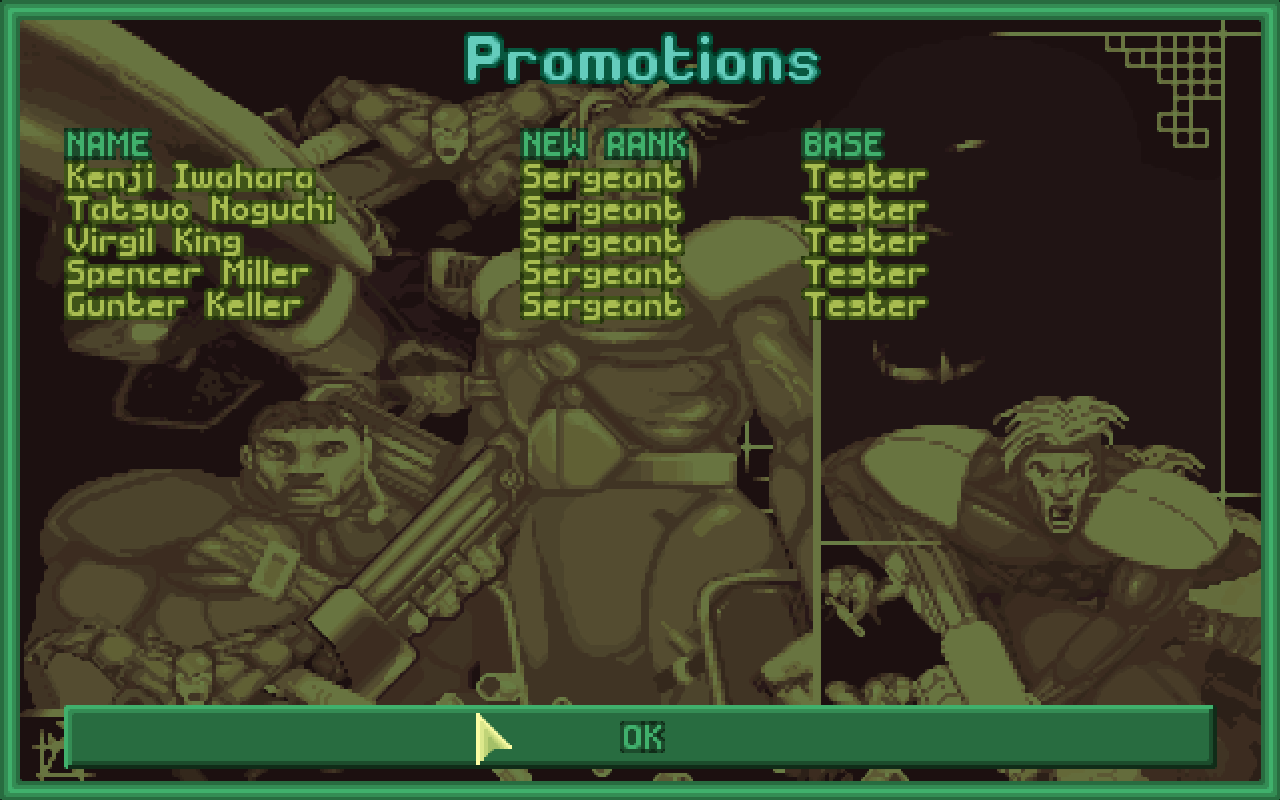 Oh, and field promotions all around for the survivors.

Unfortunately, your men start at a significant disadvantage against the invaders, who wield plasma weaponry that will generally drop them in one hit.  This changes for the better once you manage to get some armor researched and built, but until then you should probably expect your squad to suffer more casualties than redshirts on the set of Star Trek. 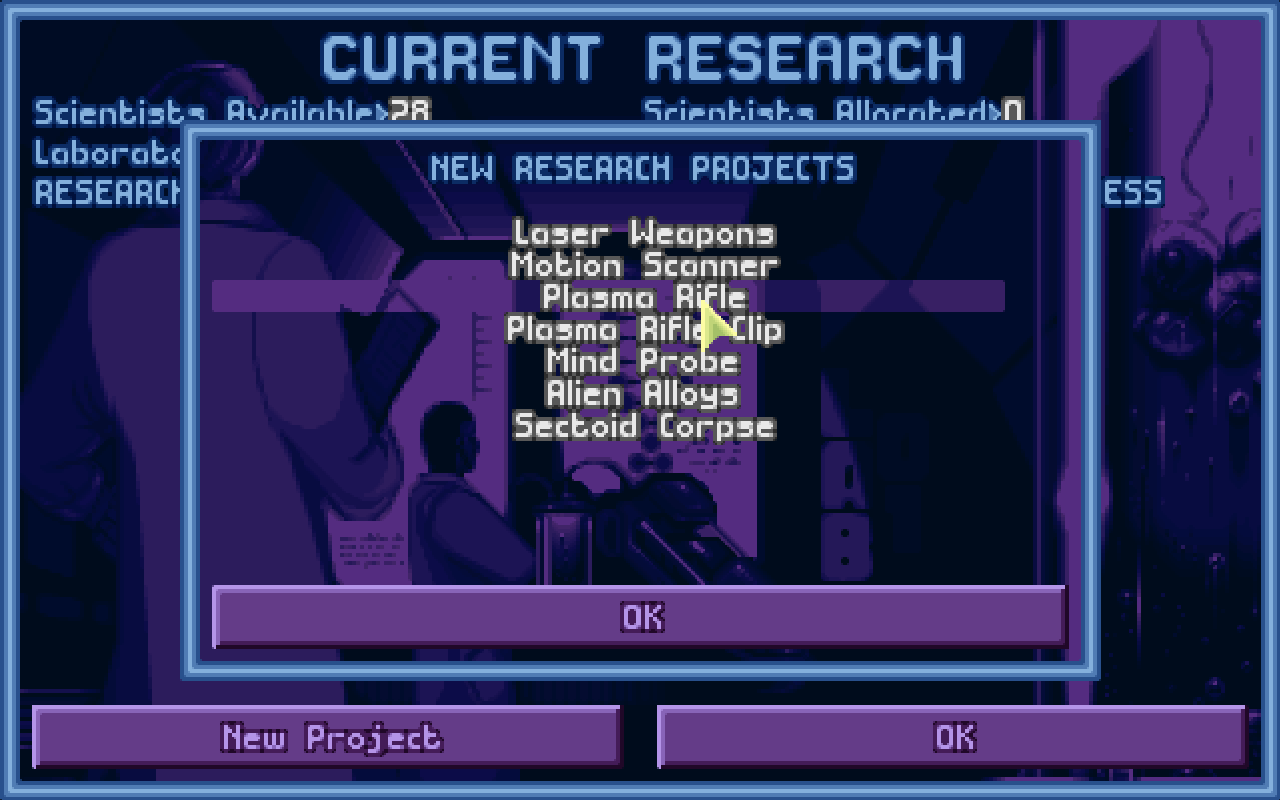 We'll research plasma rifles so we can something with a bit more punch (and much better accuracy).  For some odd reason you can't actually use these guns until research is finished...

Time passes as time does... 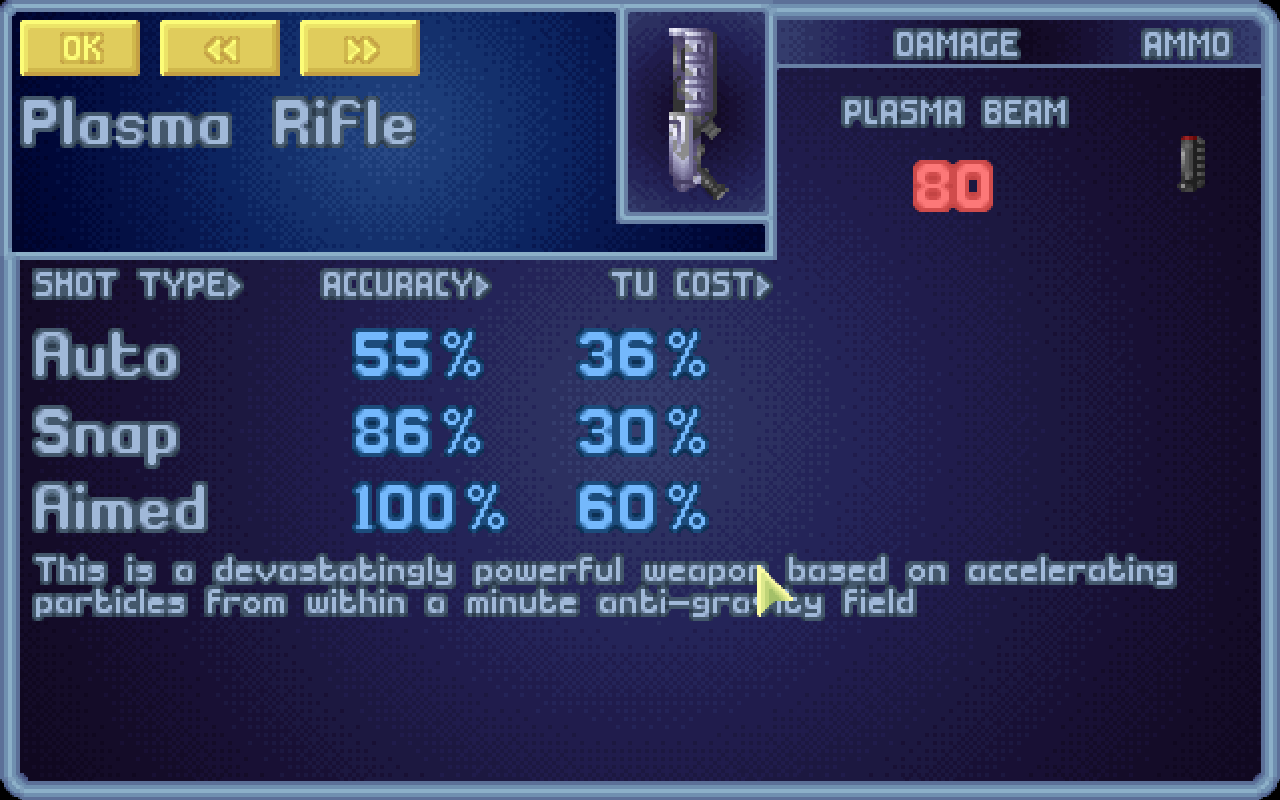 Sweet.  Oh, did I mention you need to research the clips too before you can use the guns themselves?  Blah... 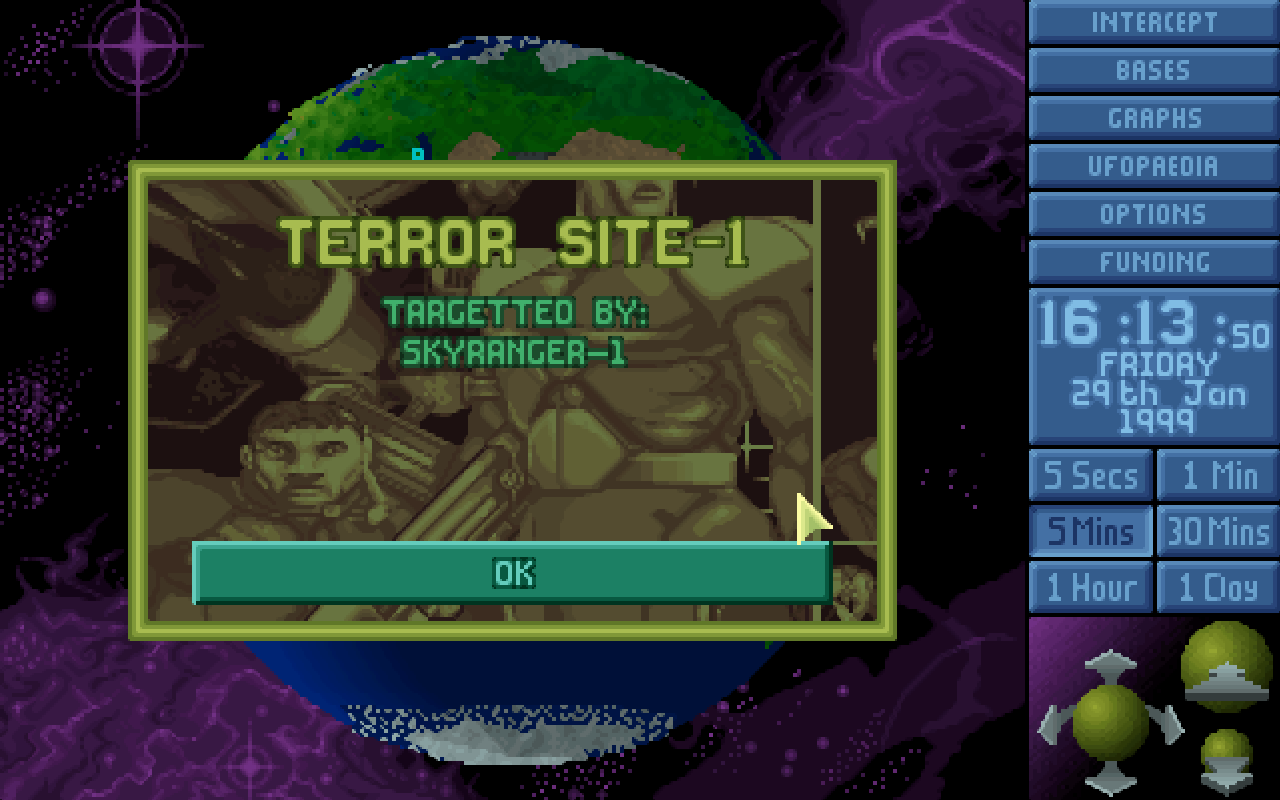 Before your first month is out, you'll likely have incurred the wrath of the aliens and they'll launch a Terror Campaign against a random city as retribution.  In short, they bring out their big guns and start wrecking up property and shooting civilians to try and teach you a lesson.  Naturally, you'll want to stop that sort of thing - it doesn't reflect well on you if you let one of your funding countries' cities get the axe taken to it, now does it? 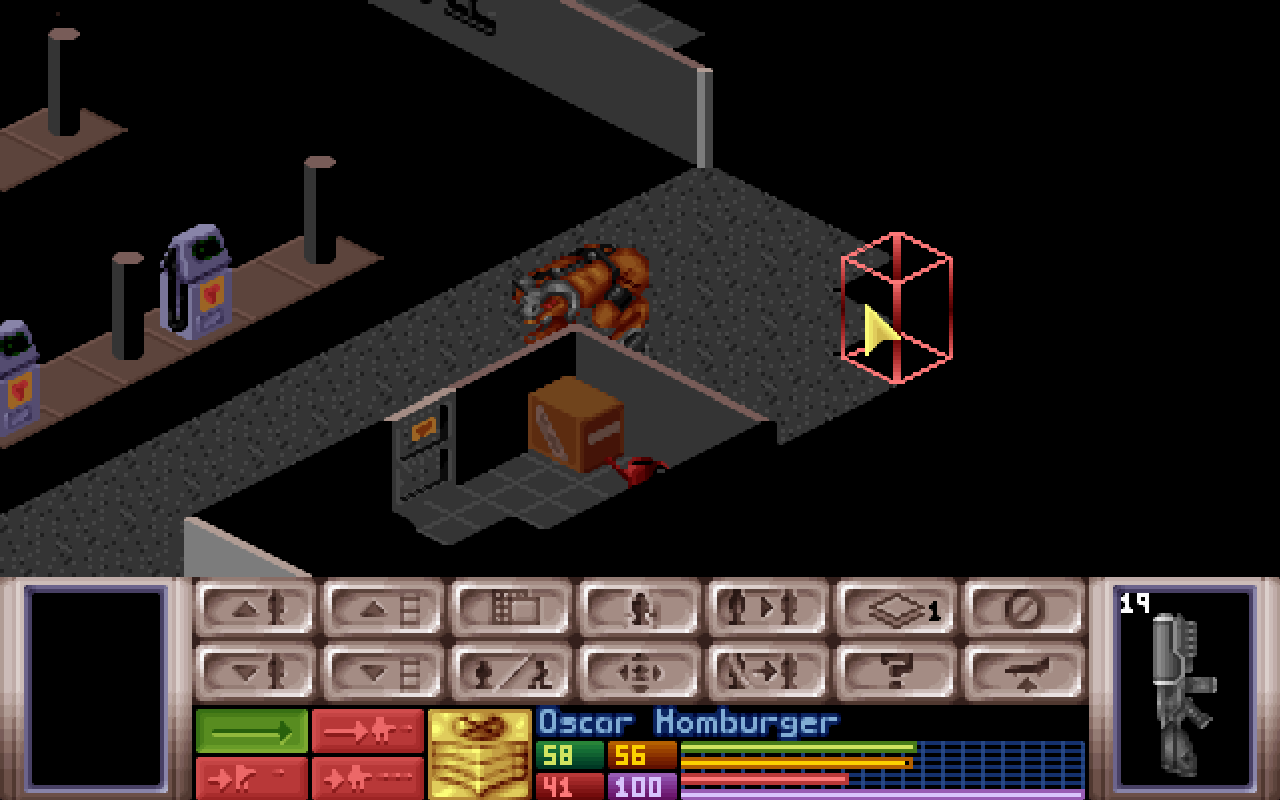 And already we can see one of their big guns.  Namely, a Reaper.  A big two-legged bull monster that can take a ton of abuse before going down.  Fortunately, they only have a short-ranged attack (a bite) and a well-placed grenade can take them down rather quickly.

I didn't get a picture of them, but this is also our first encounter with Floaters.  They're not much tougher than the standard Sectoids, but they do have the ability to fly, which can make it trickier to draw a bead on them. 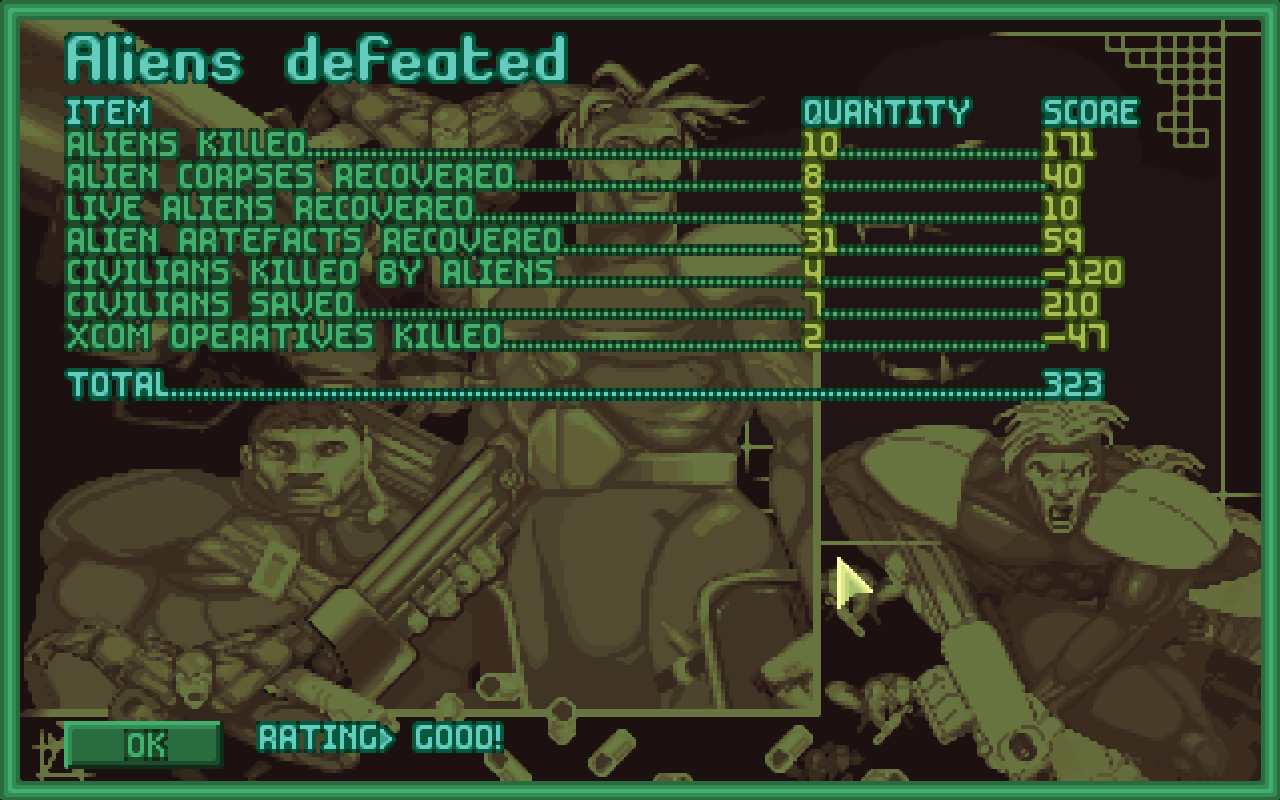 After a fairly by-the-numbers battle, we sustained some losses and there's a few dead civvies.  Still, we managed to thwart the terrorists, so the Australian government should be happy.  Guess we'll see in a couple of days. 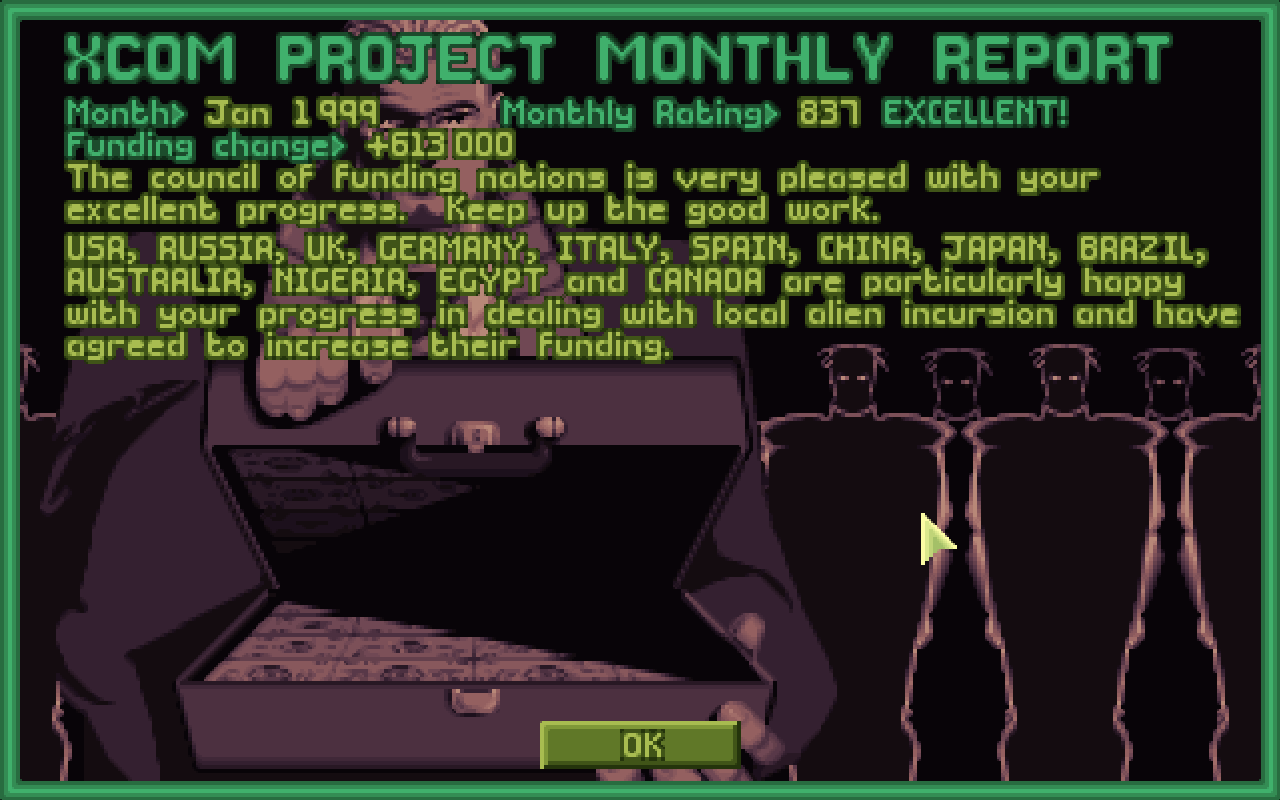 At the end of each month, you'll be given an evaluation by each of your member nations.  If you've managed to keep them happy by keeping their territories relatively UFO-free and successfully thwarting terror missions, they'll generally be satisfied and agree to increase their funding.  If you do poorly, however, they may reduce their funding level or even completely withdraw from X-COM in extreme circumstances.  While your main income will come from scavenging and selling alien technology, it's still definitely in your best interests to keep your member nations happy, as an extra few million dollars a month is nothing to sneeze at.

That's just a brief look at the game, of course, but you now have a good idea of how it operates.  As you get further in the aliens begin to up the ante, launching more frequent abductions, building their own ground bases, seeking and carrying out direct attacks against your bases, and even trying to turn your member nations against you; if successful, that country will withdraw from the X-COM project and take all future funding with them.  They also begin bringing bigger and nastier enemies into their assaults, including Snakemen, Mutons (hulking brutes who can shrug off multiple shots) and Chryssalids (zombie-spawning nasties more than a bit reminiscent of HR Giger's Aliens).  They'll also get a bit nastier with their techniques, bringing in psionic aliens to disrupt your squaddies and even turn them on one another.  You'll have to do a lot of capturing, researching, upgrading and selling captured tech just to keep pace with them and survive long enough to uncover their base of operations, leading to a final, climactic battle that will determine humanity's fate.  It does get extremely tough as it goes on, but that's part of the fun - you're just barely keeping an increasingly aggressive alien invasion in check, so it's all the more rewarding when you manage to overcome it all and deal the final blow to their forces.

With its unique blend of immersive strategy, challenging gameplay and its vast array of features, UFO Defense was a big hit at the time, resulting in four sequels of varying genre and quality before Microprose and Mythos Games ceased operations in the early 2000s.  Persistent fan demand eventually led to a reboot series headed by Firaxis, which so far has spawned two games - a third-person tactical shooter called The Bureau: XCOM Declassified (which, while not terrible, definitely doesn't do the series justice) and a respectable remake of the first game named XCOM: Enemy Unknown.  The original game's author also recently released a spiritual successor called Xenonauts, which features gameplay much more faithful to the original X-COM title.

Maybe I'll review those other games someday, but for now I just wanted to give a brief primer to the series, its universe and its gameplay style.  And urge you to buy a copy of UFO Defense, of course, since you can get it for a meager $5 on Steam these days (or $15 if you buy the package with all five of the older titles).

I'll close this article out with a few miscellaneous tips, since this game is tough as nails.

Oh, and you may want to check out XcomUtil as well, which fixes several bugs in the game (including a rather notorious one that always resets the difficulty to "Beginner" after completing your first mission), rebalances some weapons and adds randomized world terrain and maps, among other features.  Any of these options can be toggled on or off at your leisure, so you can essentially create your own Xcom campaign and make it as easy or hard as you want.  Very fun, and it makes an already great game even better.