While Nintendo and Sega had captured everyone's attention with their groundbreaking consoles in the mid-80s and early 90s, another gaming renaissance was quietly going on in the background.  PC platforms (including the Amiga, Commodore 64, Amstrad CPC, ZX Spectrum and all manner of IBM compatibles) were gaining a surprising amount of support from big name companies and independent studios alike.  This included ports of existing titles, licensed properties and all manner of exclusive IPs.  Lack of quality control on these platforms resulted in a vast amount of garbage, but it also brought a lot of surprisingly talented and ambitious companies to the forefront, free to create their vision without a looming hardware company's censorship policies or some over-controlling publisher demanding that they dumb down their project to make it more "marketable".  As a result, they ended up creating titles that were every bit as fun, imaginative, deep and well-designed as any good Nintendo or Sega title, many of which still hold up surprisingly well today.

Case in point, we have Scorched Earth, one of my favorite games of all time. 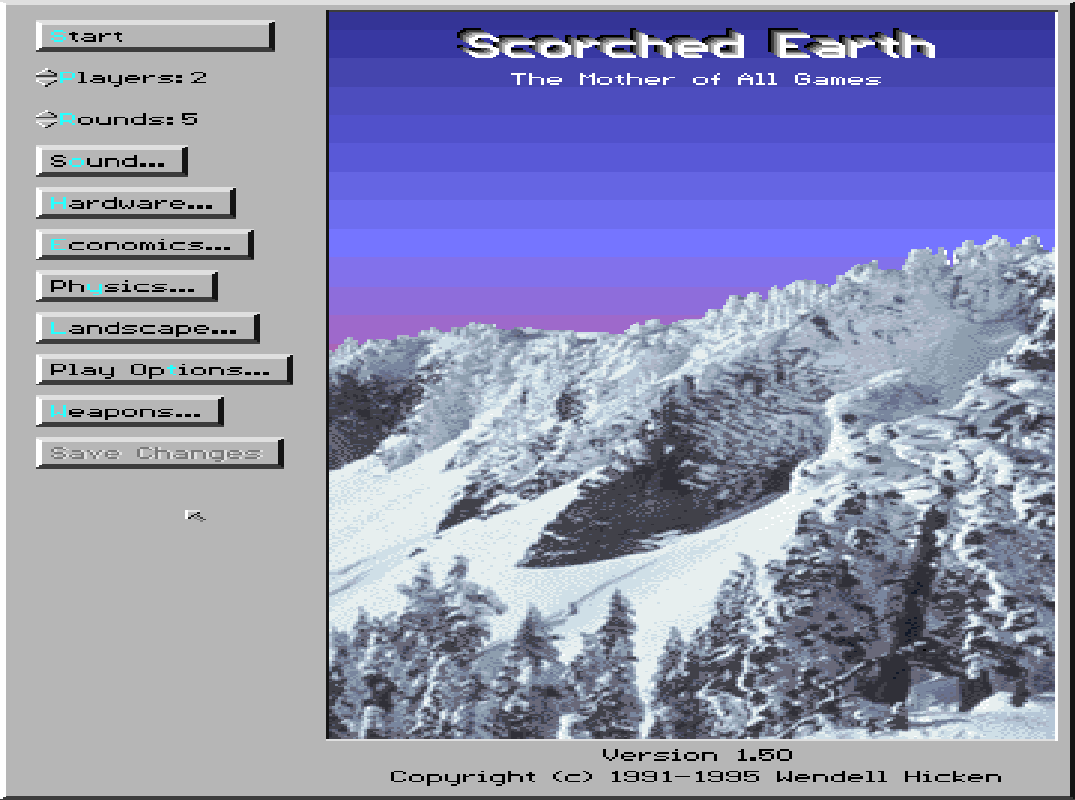 A one-man project developed by Wendell Hicken from 1991 to 1995, Scorch is something of a precursor to Team 17's long-running Worms series, being based around small units that have a wide variety of weapons and try to eliminate all the other units on the screen to be the last one standing.  But while Worms was known for its quirky humor and cute graphics, Scorch differentiated itself with one thing - sheer customization and variety. 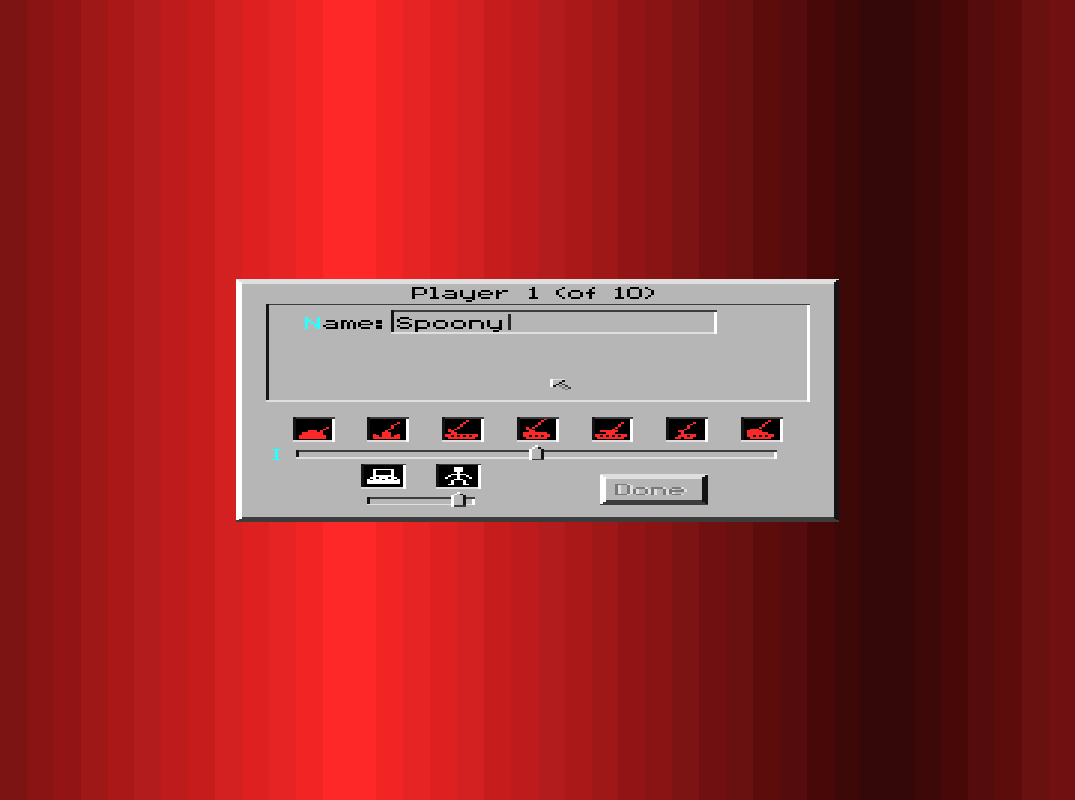 The character setup screen.  While your tank's color is predetermined by your number in the player queue, you do get a choice of one of seven tanks - two immobile ones, four treaded tanks of various sizes, and, on the far right, a triple-turreted tank, which behaves much like any other but fires Baby Missiles and Missiles in bursts of three rather than one at a time.  This is available only to computer-controlled players in the Shareware version; registered users can play as them.  All tanks of a kind play the same, so there's no real advantage to picking a larger tank over a smaller one or an immobile one over a mobile one (save possibly as a means to give a slight handicap to a less experienced player).

In addition, some (or all) players can be controlled by the computer, with eight different AI settings.
Moron - Just fires around randomly.  Generally not much of a threat to anyone but themselves.
Shooter - They try to make straight shots, usually.  Not much of a threat if you can keep some land between you.
Poolshark - If you're using the rebounding walls option, they'll try to angle shots off of them to hit you.  Otherwise they just behave the same as Shooters.
Tosser - They fire out a shot randomly, then gradually adjust their aim and power until they hit something.
Chooser - They have the ability to pick from one of the four previous methods, and will choose which one they think is most effective in a given situation.
Spoiler - They factor in wind, gravity and everything else when making shots, making them very deadly.  They seem to have trouble in high air viscosity though.
Cyborg - Like the Spoiler, but more vicious.  They tend to go after weakened tanks, tanks that are winning, or people who have attacked them in the past.
Unknown - Randomly picks from any of the above. 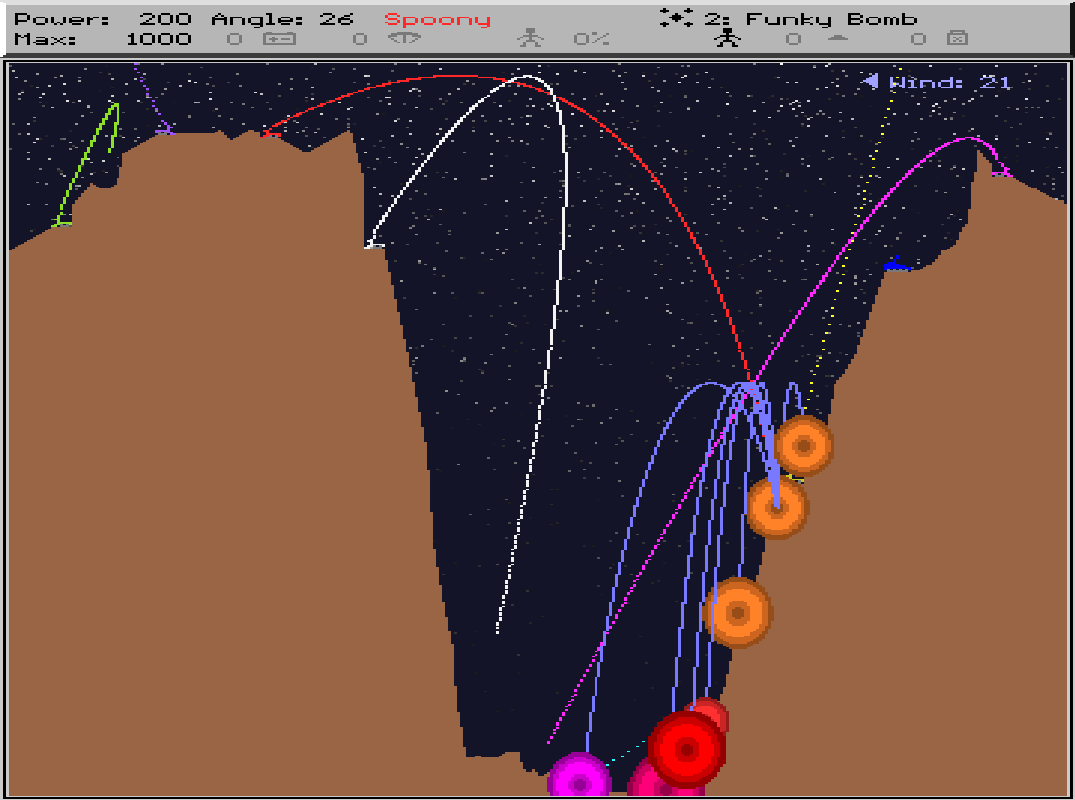 Up to ten players can join in the melee, and each one is armed with a variety of weapons, which serve both as artillery to destroy your opponents and abilities that allow you to take a more defensive approach.  Parachutes can eliminate fall damage, for example, while fuel allows you to move to a more advantageous position, batteries allow you to recover from damage, mag deflectors and shields will deflect enemy shots, and the ever-useful (but incredibly expensive) "Auto Defense" will allow you to activate any of your defensive items at the start of the round, before any shots are fired.

As for weapons, we've got quite a few of those to choose from as well.  Every tank is armed with an unlimited number of "Baby Missiles", which create a tiny explosion upon impact.  Not too impressive, but a single direct hit with one is still enough to destroy an opponent.  Flashier options include Missiles (slightly larger blast radius than the Baby versions), Baby Nukes and Nukes (very large explosions), Napalm (spreads along the ground and ignites, damaging anything it touches), Rollers (which roll downhill and detonate when they hit a tank or a vertical face) Sandhogs (which burrow through the ground and bypass shields), Lasers and Nuclear Blasts (which expend batteries and can cut through terrain and shields, but have a short range) and the ever-hilarious MIRV and Death's Head, which pepper a wide area with enormous explosions and can very well wipe out everyone on the map (including yourself) if you're not careful with them.  Most of these can also be supplemented with various "guidance systems" that will automatically aim your shots; this all but guarantees you can hit your opponent, though they will also cost a significant amount of your money to get in the first place... 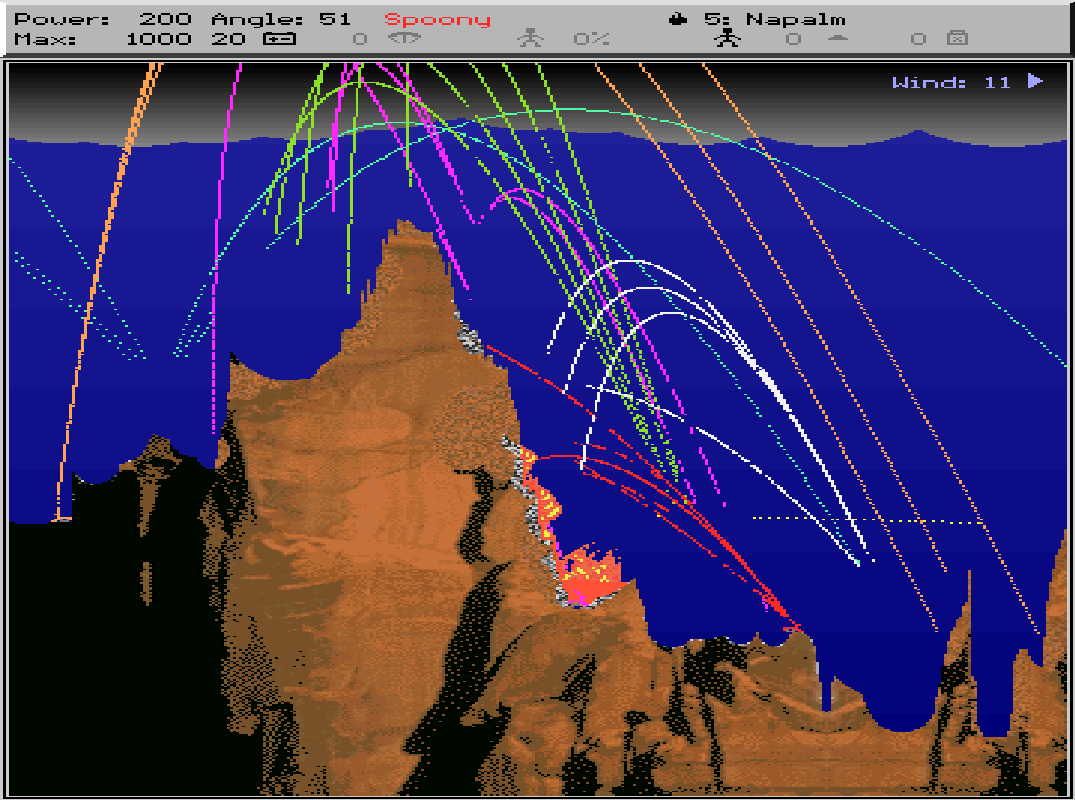 But wait, you ask.  Why have all these extra weapons when just the basic missile is enough to wipe out any given tank?  Well, that's part of the fun.  This game is hectic.  You will frequently die before you even get a turn.  A misfired shot can blow up the guy next to you and he in turn can erupt into a Nuke-sized fireball, destroying you as well (as well as taking a large chunk out of the hillside next to him, causing one or two more people above to fall to their deaths).  Some nutbar can bust out an MIRV or Leapfrog and wipe out half the tanks in a single go.  A shooting star or lightning bolt can fall from above and destroy a tank's shields or, if they're unshielded, damage or even outright destroy them.  It takes a handful of skill and a lot of luck to survive all the chaos (though, if you're so inclined, you can turn off the bigger bombs, meteors and lightning and just reduce it to a battle of pure skill and attrition.  But what's the fun in that?). 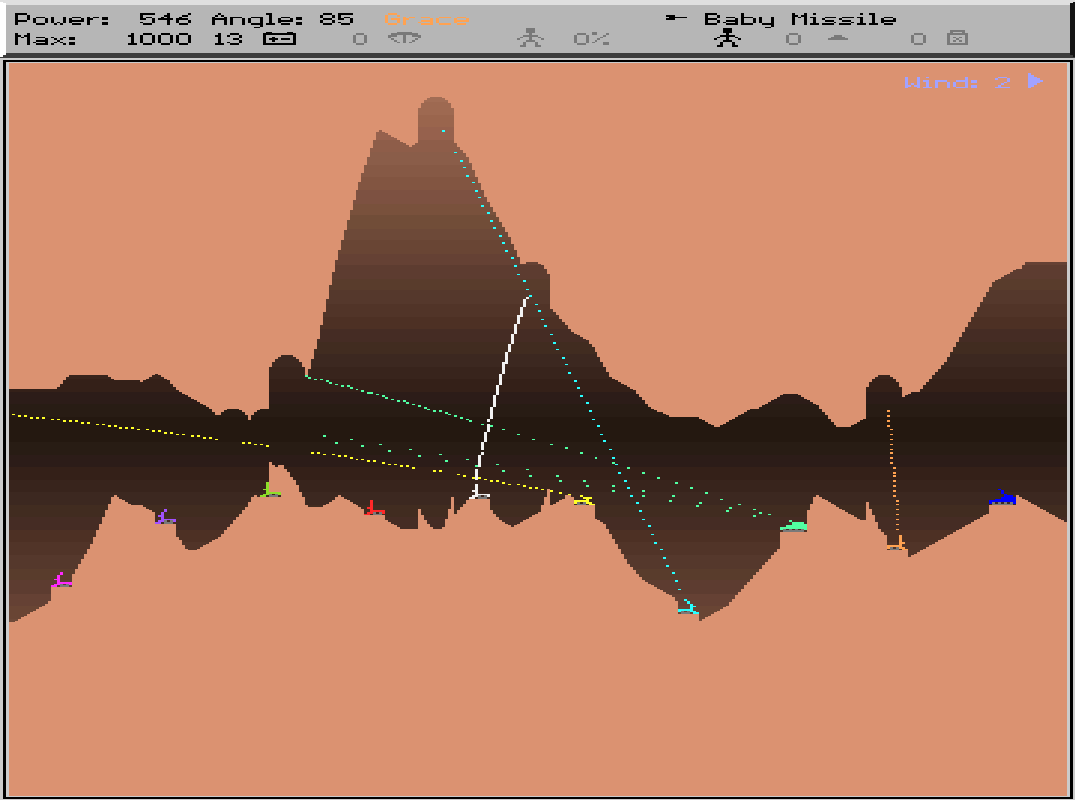 There are also a fairly large variety of battlefields to see.  Basic semi-random hillsides and valleys are there, but you also have stormy levels with lightning occasionally striking the battlefield, starry skied battlegrounds with falling meteors, and the ever-annoying cave levels, where hitting the roof of the cave will dislodge dirt and cause it to fall onto tanks and create walls you'll have to shoot your way through to continue the battle (usually just in time to have more dirt shot down and block it up again).  The most recent revision of the game (1.5) also adds in a nifty feature in the form of scanned mountainsides, which gives some nice high-resolution visuals to an otherwise graphically basic game.  The registered version includes more of said mountains, as well as a program to scan in your own photos to use as mountainsides.  So if you want tiny tanks fighting on top of your car or your house or your own face, go nuts! 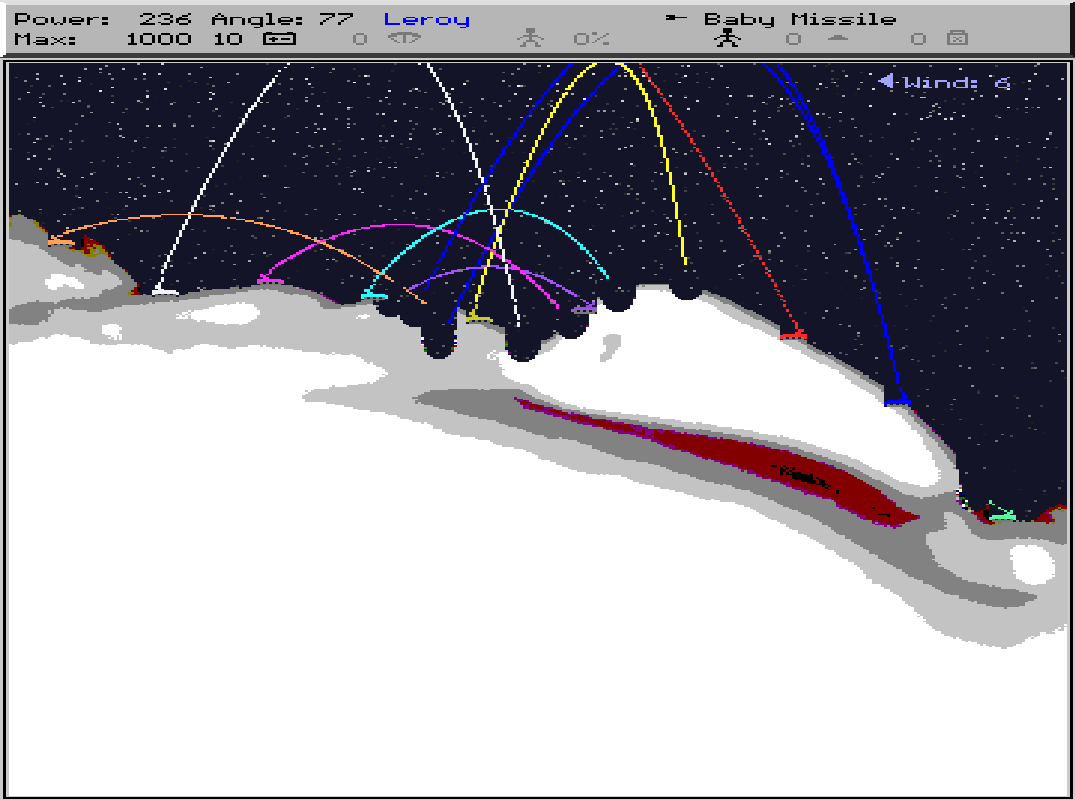 But what really makes Scorch great is the sheer amount of customization it has to offer.  Virtually every aspect of the game can be tweaked and modified.  Its virtual economy, the air viscosity and wind speed, gravity, teams, scoring modes, turn order, how turns are taken, wall effects, explosion sizes, and so on.  Hell, you can even customize the smack-talk lines tanks occasionally throw around when firing a shot by directly editing the files.  Want a hectic, chaotic battle with huge explosions, ever-changing winds, shots that wrap around the screen and relatively flat terrain?  Go for it.  Want something akin to "Outlaws" on the Atari with big hills and walls you have to ricochet shots off to hit your target?  That's okay too.  Want to stop people from spamming guidance systems and overpowered weapons?  Put the "Free Market" option on, which gradually makes frequently bought items more expensive and lowers the price of ones that don't sell.  Then change the scoring mode to "Standard", which causes you to gain points for dealing damage but lose them for inflicting a killing blow.  That always throws them for a loop.

In conclusion, while it may not be much of a spectacle with its basic visuals and bare-bones beeps, boops and square waves for sound effects (and its planned network play was sadly never implemented), Scorched Earth is fun at its finest.  The sheer amount of customization it allows for keeps its gameplay fresh no matter how many times you replay it, and it captures the simple, joyful essence of blowing stuff up while implementing just enough strategy and unpredictability to keep you on edge.  So head over to the creator's website and grab your own copy today.  You name your own price!