Mother 3 underwent many rewrites and changes during its nine years of off-and-on development, and as a result of all of that the game contains a considerable amount of unused content.  Which we shall now take a look at since some of it's honestly pretty interesting.

Much of this data is taken from The Cutting Room Floor.  Head over to their page and check out all the interesting and obscure stuff this game (as well as many others) has to offer!

Keep in mind that much of this writeup is speculation on my part and should be taken with a grain of salt.


(Video provided by starmennet, skip to 0:37 for the backgrounds)

According to Shigesato Itoi, the final battle was originally intended to be a much more surreal and nightmarish scene with no dialog.  He and the developers eventually decided that it was "too frightening" and went a different route with it, leaving several (rather disturbing) battle backgrounds unused.

(The first part of the video shows an unused enemy, the Tiny Forest.  Aside from lacking an overworld sprite, it's fully functional.  Probably just an oversight on the developers' part)

This video shows a few more removed scenes that would probably have tied into the scrapped final battle (as evidenced by the game putting you at the battle after they finish playing), as well as a scene of Fassad's interpreter flying through the sky with music similar to that of the Skyrunner scenes from Earthbound.  Probably just a placeholder for an idea that ultimately went unused.

There are several more unused backgrounds in the game; some silly, some unremarkable.  Several seem to feature a skinny Pigmask character (more on him later).

There are many unused sprites and animations in the game, chiefly centered on Claus (unsurprising as early trailers for the cancelled Nintendo 64 version depict him as a protagonist alongside Lucas).  Probably the most interesting of these are the unused images of the Masked Man, depicting him breaking down and being rebuilt.  This suggests that more battles with the Masked Man were to occur at some point, possibly with him being rebuilt into a stronger form after each defeat (similar to events that occur with Fassad). 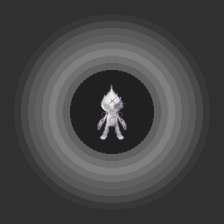 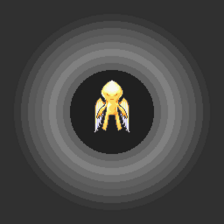 Two vaguely "T-1000" looking versions of Masked Man, one of which is gold in color and has angelic wings. These were likely intended for the unused final battle sequence, possibly having him become more or less "machine-like" as the fight went on.  Or, if the Masked Man was to be defeated and rebuilt numerous times, these could be his final forms...

Porky's capsule closing.  Seemingly a "work in progress" sprite as Porky and his machine look quite different here than in the final game.

Porky's capsule shattering.  Apparently a more cruel fate was to befall him at one point.  This may also have something to do with the "Kindness" stat, which we'll discuss later.

Flint stabbing the mecha-drago, an event that takes place in the narration box during the battle itself.   This may also have been a part of an alternate scene where Flint finishes off the Drago after the battle rather than sparing its life...

Another unused graphic of the skinny pigmask guy.  He may have been intended to be a recurring nemesis character who was ultimately made redundant with the introduction of the Masked Man.

This silly looking bear sprite may be an unimplemented enemy or tied to the Honey Shower item, which summons bees.  Occasionally the text box narration says it summons a bear instead; even with that, though, you never end up seeing this sprite.

There is evidence in the code to suggest that Flint was once supposed to be playable for a longer period of time; possibly even a permanent party member.  He is able to equip weapons (Lucas' stick weapons) that appear well beyond the point when he is actually a playable character in the game.  There are also unused sprites of him holding on to something, which would match up with the scenes at Thunder Tower and Saturn Valley when everyone in your party is holding onto the Rope Snake.

A planned mechanic that ultimately went unimplemented was the "Coupon Exchange", where you would apparently trade in coupons received from enemies for cash.  This was probably scrapped when they decided to make frogs into a catch-all save point and ATM equivalent.

There's a hidden stat called "Kindness" that may have factored into the game at one point in development, possibly allowing you to make choices that would raise or lower it (as evidenced by the unused graphics of Porky's capsule shattering and Flint stabbing the mecha-drago) or even see an alternate ending if you raised it high enough (as evidenced by the unused "Happy End" graphic above).  There are still a few scripted events in the game that raise this stat; however, it doesn't seem to have much functionality left.

There is an unused battle command called "Consider" that doesn't seem to do anything.  This may have factored into the unused final battle somehow as the "Sing" and "Pray" commands do in the previous two games.

Duster only ever utilizes one timed-press melody while all the other characters (even Claus!) have five or six variants.  There is still game data for Duster's five alternate patterns, though - you just never see them because of a bug in the code.  The creators of the translation have stated that they intend to fix this in a future patch.

There are quite a few unused memos and bits of dialog in the game, some hinting at scrapped mechanics or ideas from earlier stages of production.

Apparently the Healer character from the first two games was slated to reappear in Mother 3, but was ultimately scrapped.  He was apparently supposed to reside in the Item Guy's tent, as evidenced in the text and by an unused sprite (seen above).

There's also mention of a "Bird of Light" in an unused memo, presumably intended as a "good" counterpart to the Dark Dragon.  There is no sign of it in the game at all outside of this unused memo.

In the fan translation, there is an unused line of a character from the Chimera Lab making reference to Giygas.

•Up ahead is a monster that could even make quick work of a skilled security guard like me.

However, this is not a reference to a planned appearance from Giygas (as was long rumored), but a result of the line not translating well from Japanese.  According to the translator:

"He didn’t know about Giygas exactly, that line doesn’t work well in translation. He was trying to put the feeling into a word that didn’t exist, and it just happened to come out as “giigu”. Japanese uses sound words to express feelings all the time, so this isn’t anything unusual. In fact, Itoi even said that he came up with "Giigu"’s name from the fact that it simply sounded unpleasant/disturbing."

At one point in development the seventh Magypsy was not Fassad, but rather an entirely seperate character.  There was actually a fully written conversation with the character, too:

•Oh, welcome.
•Who might you be?
•Are you the Magypsy who lives on this island?
•That's right.
•I'm Locria, the Magypsy of New Pork Island.
•And you are?
•I'm [KUMATORA 23 04 00], Ionia's apprentice, and daughter of King Osohe.
•So you're the ones going around pulling all the Needles, then?
•Yeah.
•And the Needle you're guarding here is the last one left.
•Eeee!!
•Really?!
•Oh, my! Whatever is going to happen?!
•I can't wait to see!!
•The Dark Dragon's gonna be revived once the Needle here gets pulled, you know!
•Do you even understand?!
•Oh, but, that's okay.
•What happens to the world is none of my business.
•Fine! Then go ahead and ignore everything without a care in the world!
•Just don't blame me if something irreversibly bad happens!
•Locria.
•He's not a bad person. Forgive him.
•Oh!
•I'm not offended at all.
•But anyways, good luck. I'm behind you 100%.
•Thanks.
•Welcome.
•Take a quick nap? Yes No
•It's not good to push yourself too hard, you know.
•Good luck, okay?
•I'm behind you 100%.

This point may have been changed to provide a bit of a plot twist, or just for time constraints.

This rather creepy track paired with the bizarre backgrounds and bit of dialog mentioned above led to rumors about Giygas being slated to return in Mother 3.  Itoi denies this, of course, but it was an easy mistake to make considering.  This track was probably intended for the unused final battle sequence.
(The voice in the background is actually a slowed down sample repeating the words "One Two Three Five")

Another track that sounds like heavy breathing, possibly intended for the Dark Dragon. It just added more fuel to the Giygas rumor...

Another creepy track that sounds like a heartbeat. May have been intended for the unused final battle scene, or perhaps left over from implementing the "heartbeat" tracks that play while an enemy was asleep.

A leftover from Earthbound, this tune plays when you speak to a Your Sanctuary boss in Earthbound.  As there's really no equivalent to those in Mother 3, it goes unused.

A downtrodden version of the Pigmask Army theme, possibly intended to follow Porky's defeat.  The last chapter of the game does feel a bit rushed overall, so they probably just didn't have a place to fit this in.